Global Defence and Aerospace Company’s Next Generation Armoured Vehicle to Provide Unparalleled Levels of Protection and Mobility to Nigeria’s Air Force Johannesburg, March 28th, 2019 - Paramount Group, the African-based global defence and aerospace company, has proudly launched its Marauder armoured vehicle and personnel carrier within the Republic of Nigeria, in partnership with the Nigerian Air Force. The move comes as the West African nation is bolstering its efforts to effectively tackle a wide range of threats posed by various terrorist and extremist groups. 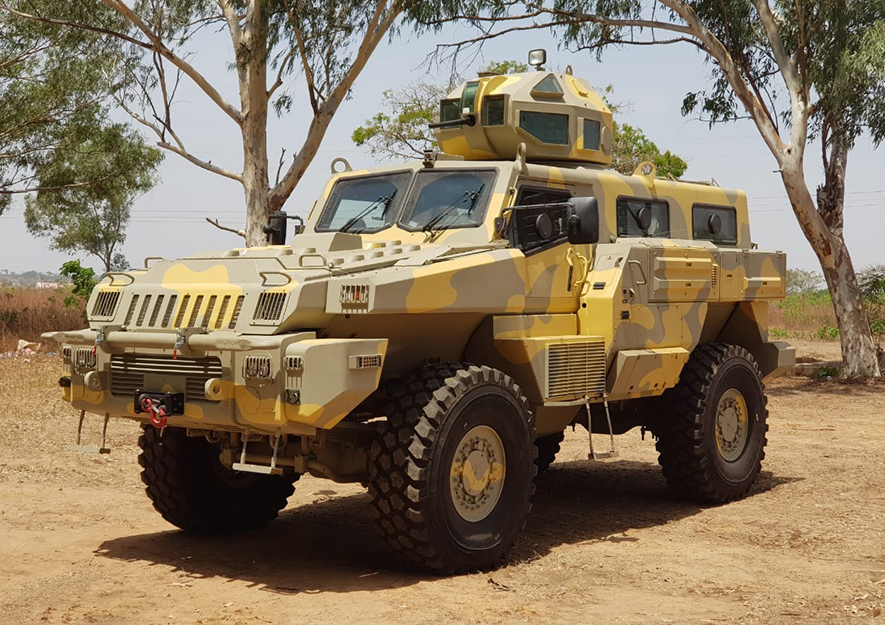 The 15-tonne Marauder is a uniquely designed armoured land system. It can be reconfigured as either a troop carrier or combat vehicle, maintaining excellent cross-country agility while reaching a top speed of 120 km/hr over challenging terrains. Described by BBC’s Top Gear as “The World’s Most Unstoppable Vehicle"it featuresa double-skinned hull throughout its cabin and crew compartment to protect it against a wide range of kinetic attacks e.g. protecting the crew against AK-47 attacks.

The vehicle can also withstand a side blast (IED or roadside bomb) equivalent to 50kgs of explosives which is critical for the assymetrical warfare experienced in Northern parts of the country. The Marauder is further equipped with specially designed anti-blast seats, which prevent injury from the extreme acceleration of a side blast or mine blast under the hull.

The Marauder offers outstanding fire power to protect its crew against heavy attacks and can be fitted with a wide range of weapons systems. These particular Marauders are equipped with a Jordanian-made snake head turret fitted with a 7.62mm machine gun.

Senior Vice President of Paramount Group, Eric Ichikowitz, stated that, “We are privileged to work alongside the Nigerian Air Force, commending, through the acquisition and deployment of the Marauder, their continued commitment to enhancing their national defence and internal security capabilities and prowess.

“Nigeria’s Government also understands not only the leadership role they play in international peacekeeping missions across the ECOWAS, but indeed how to effectively address the evolutionary nature of those cross-regional challenges posed by threats such as organized insurgencies.”

Paramount Group subsidiary Paramount Maritime notably received orders for dozens ofrigid hull inflatable boats (RHIBs) in 2018 in a multipurpose effort by the Nigerian Navy to defend its blue economy and coastline, for the continued military training of its Special Forces, rescue and patrol operations and for the protection of the nation’s oil and gas assets.

“We look forward to building on our strong and longstanding relationship in support of Nigeria’s Armed Forces, by providing highly innovative and advanced solutions to embolden the nation’s frontlines of modern-day defence and security.

“Increased security leads to increased economic growth and Paramount’s proven, portable manufacturing model can play an important role in the establishment of local manufacturing capabilities enabling the diversification of the nation’s economy and the potential to foster sustainable job creation. These are shared efforts that we believe to be vital to maintaining Nigeria’s continued trajectory.” Ichikowitz concluded.